Create your own driving commute distance map in the USA & beyond

What is a commute distance map?

A commute distance map shows you all the locations you can reach within a certain distance. The map below shows all areas that are reachable within 20 miles of Knoxville, Tennessee made using the radius map tool here. 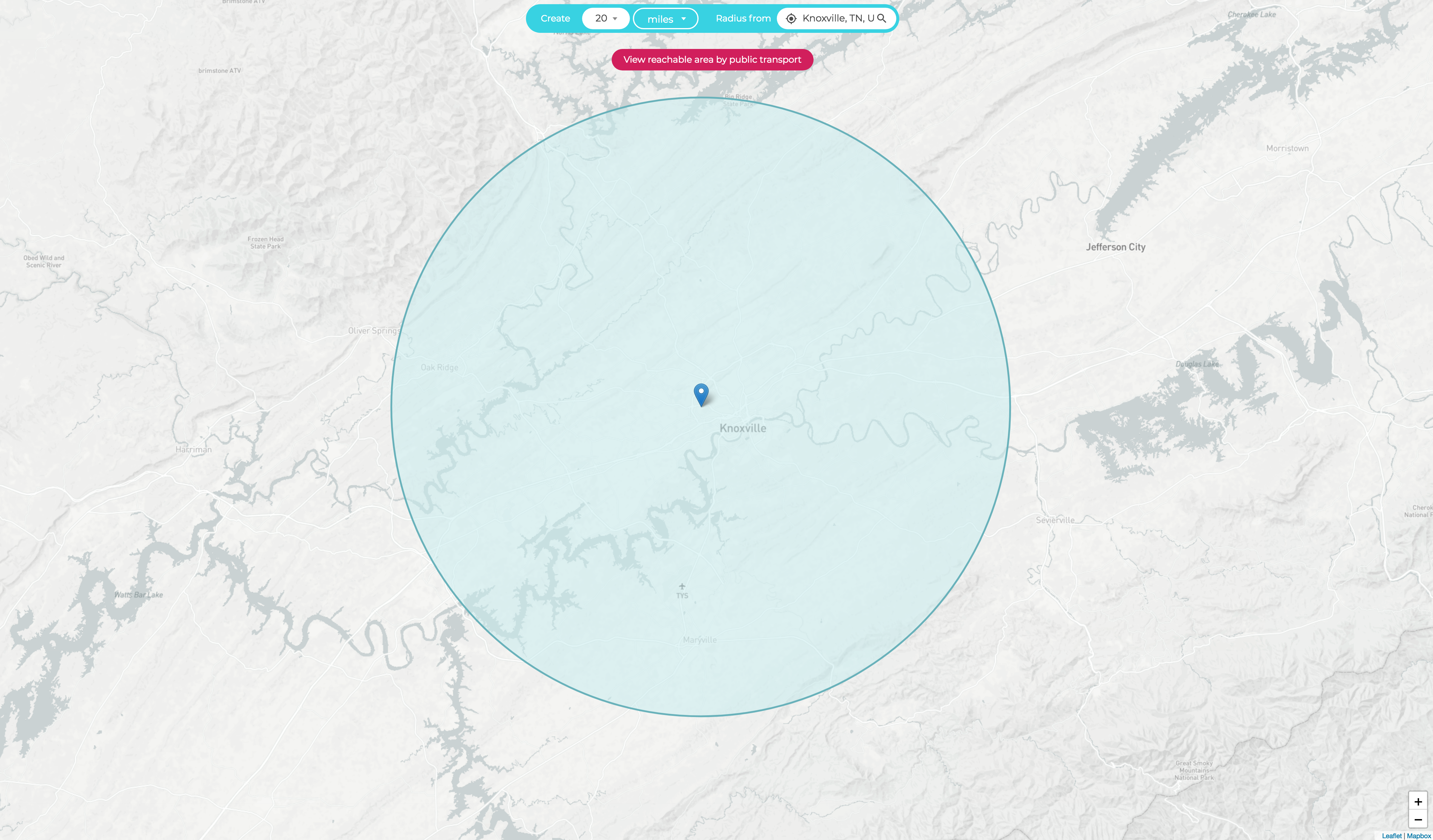 The problem with a commute distance map is that it assumes you will be travelling as the crow flies. It does not take into account road networks, mode of transport or different times of the day.

The below map compares the commute distance map to a drive time map. 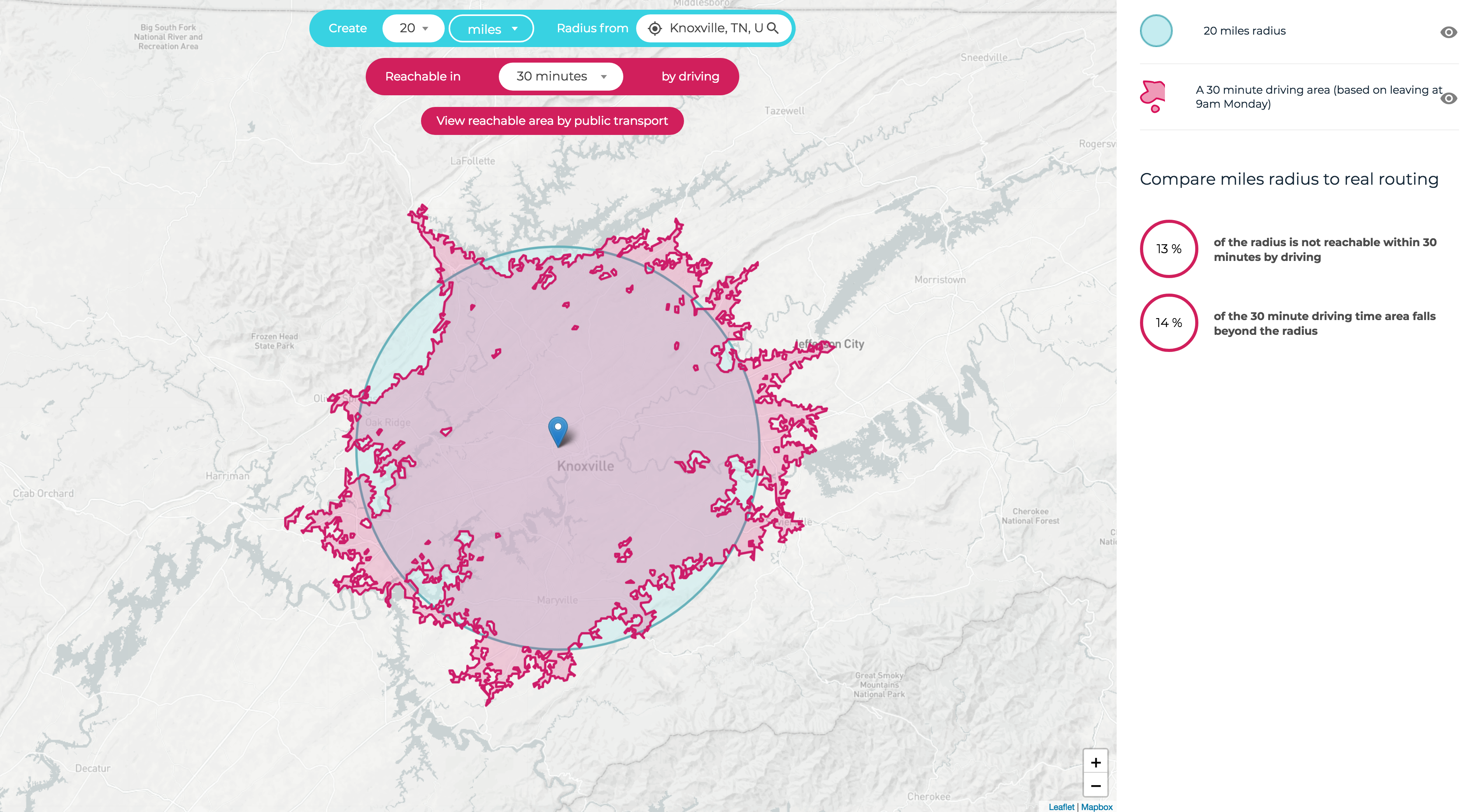 Changing the mode of transport to public transport reduces the area dramatically. For example, Oak Ridge is within a 20-mile radius, but could not be reached within 30 minutes when travelling by public transport. 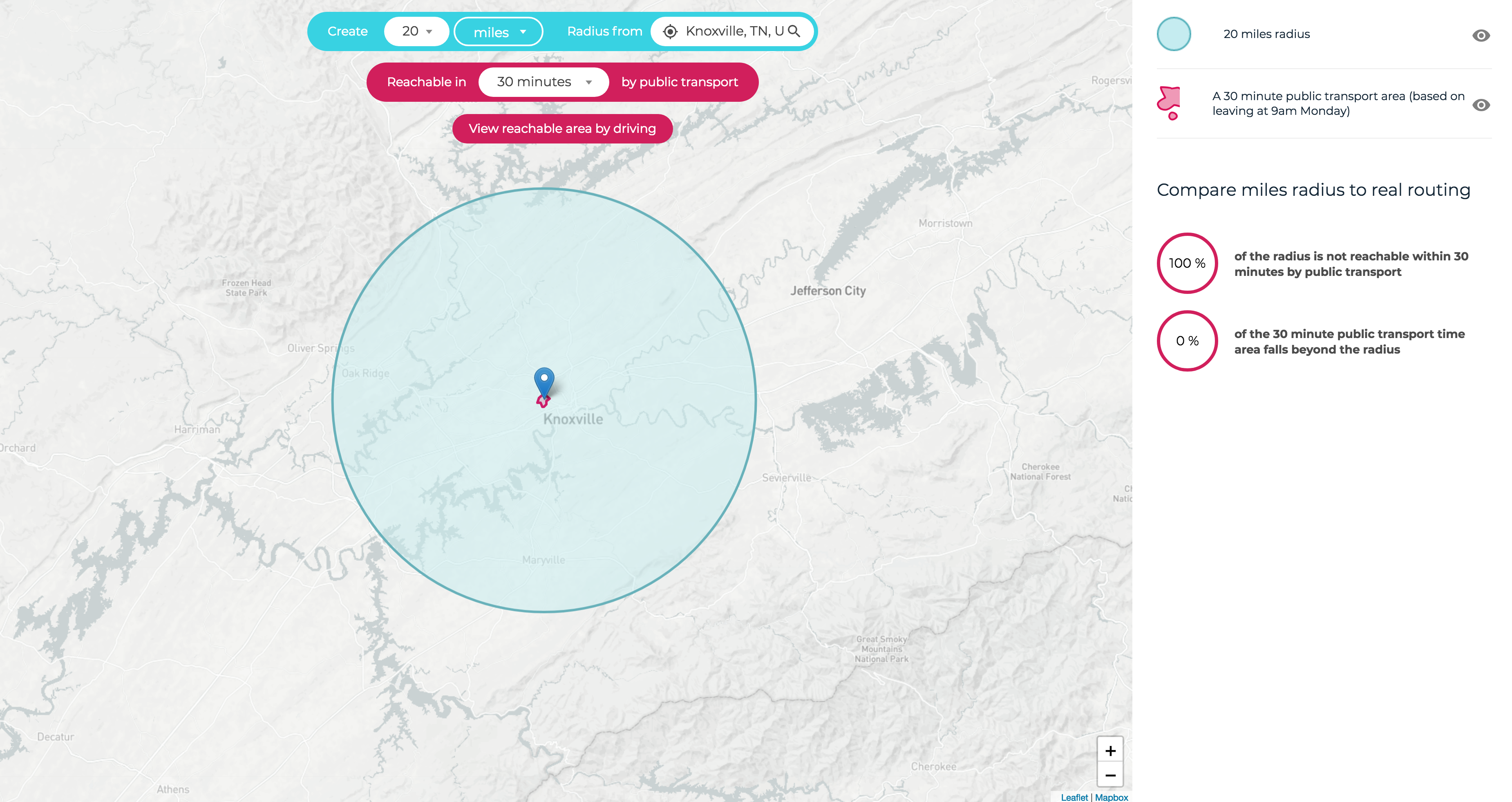 Increasing the maximum travel time to 60 minutes using public transport is also a stark difference with a 20-mile radius map. 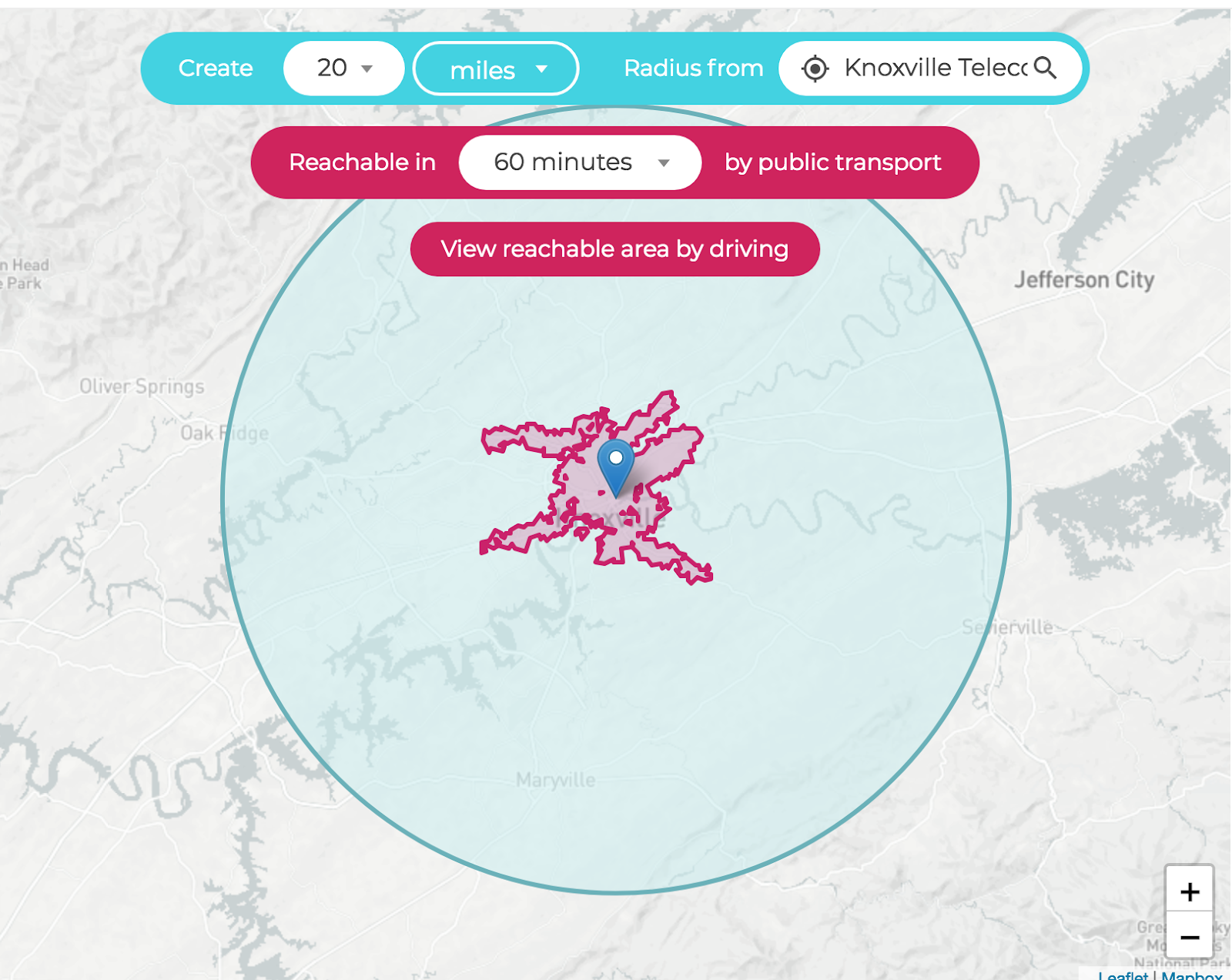 This is likely due to the public transport network in the area. In a 2010 analysis of access to transport and employment, Knoxville was ranked 95th out of 100 metropolitan areas. Transit coverage was 27.9%. Below data source. 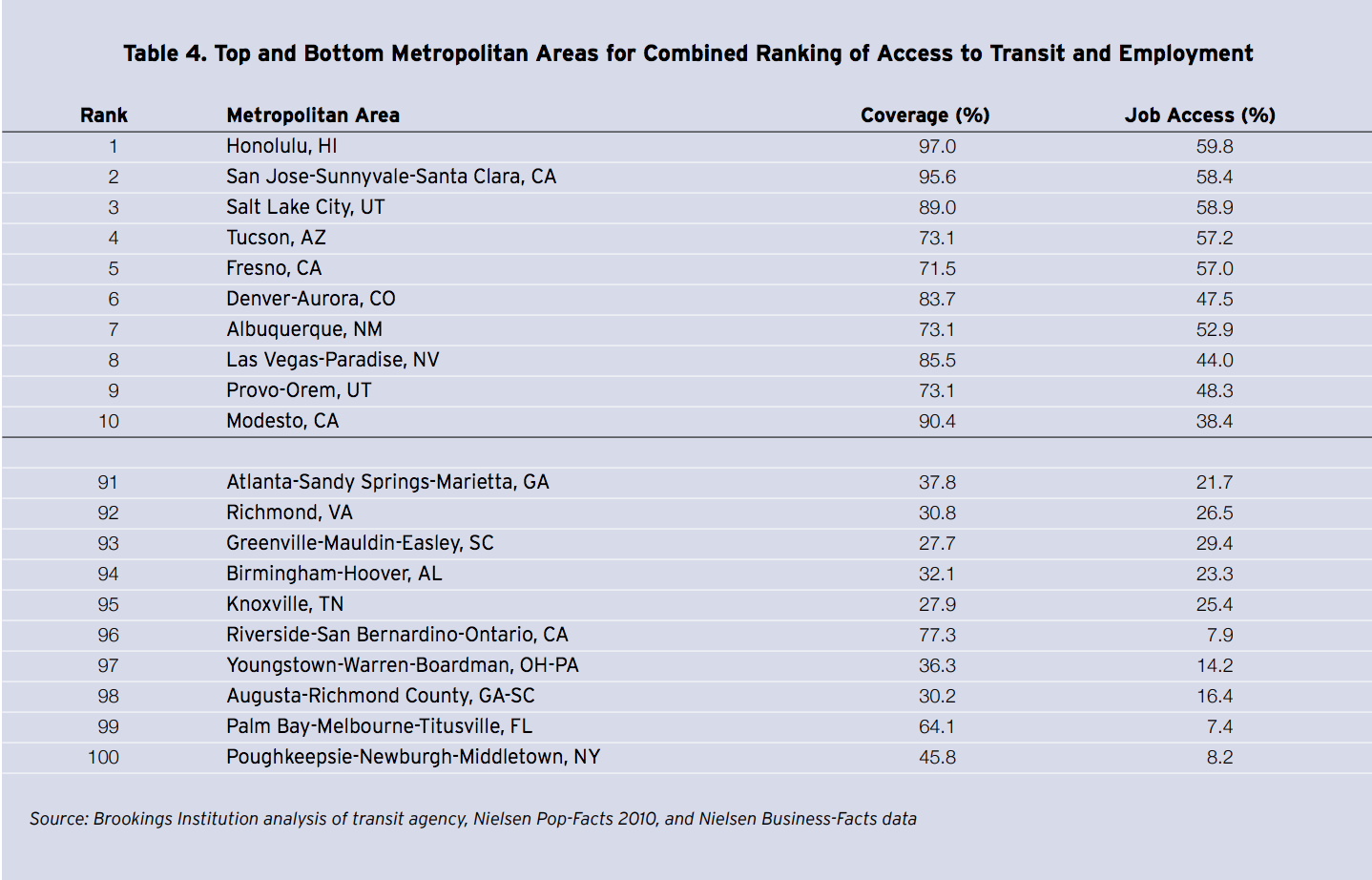 Time and mode of transport are important factors when considering your commute. There were 222 million licenced drivers in the United States in 2016 according to a Statista survey. 5.198 million people hold a driving licence in Tennessee. With a population of 6.716 million, driving is a popular mode of transport. In the city of Knoxville, it is how 93% of the population commute. Image source. 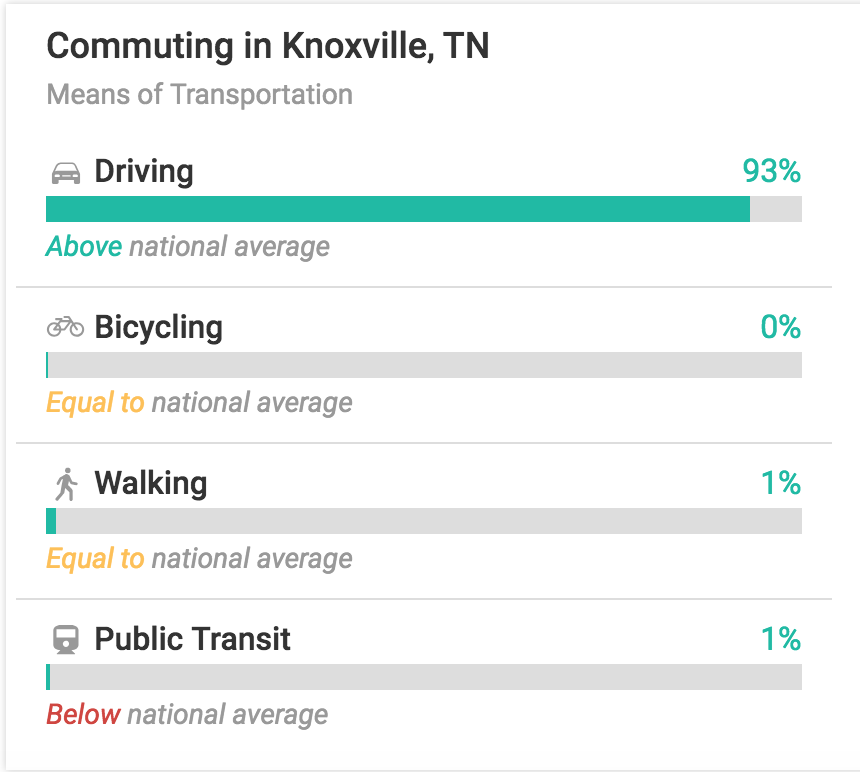 We use the Knox example but you can discover statistics for where you live in the USA, including the average commute time and popular mode of transport. Image source 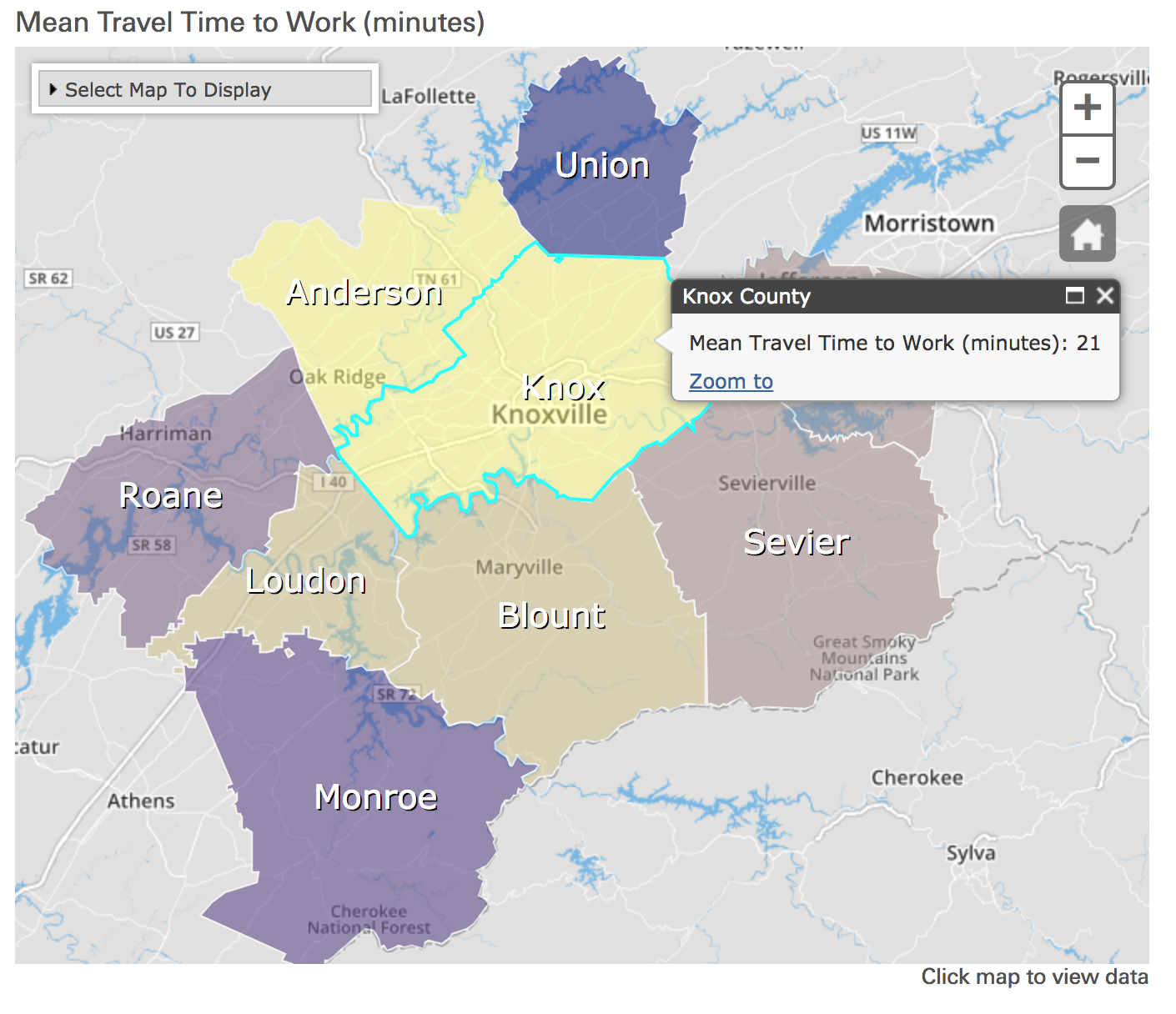 One county over, in Union, the average commute time jumps to 34 minutes. 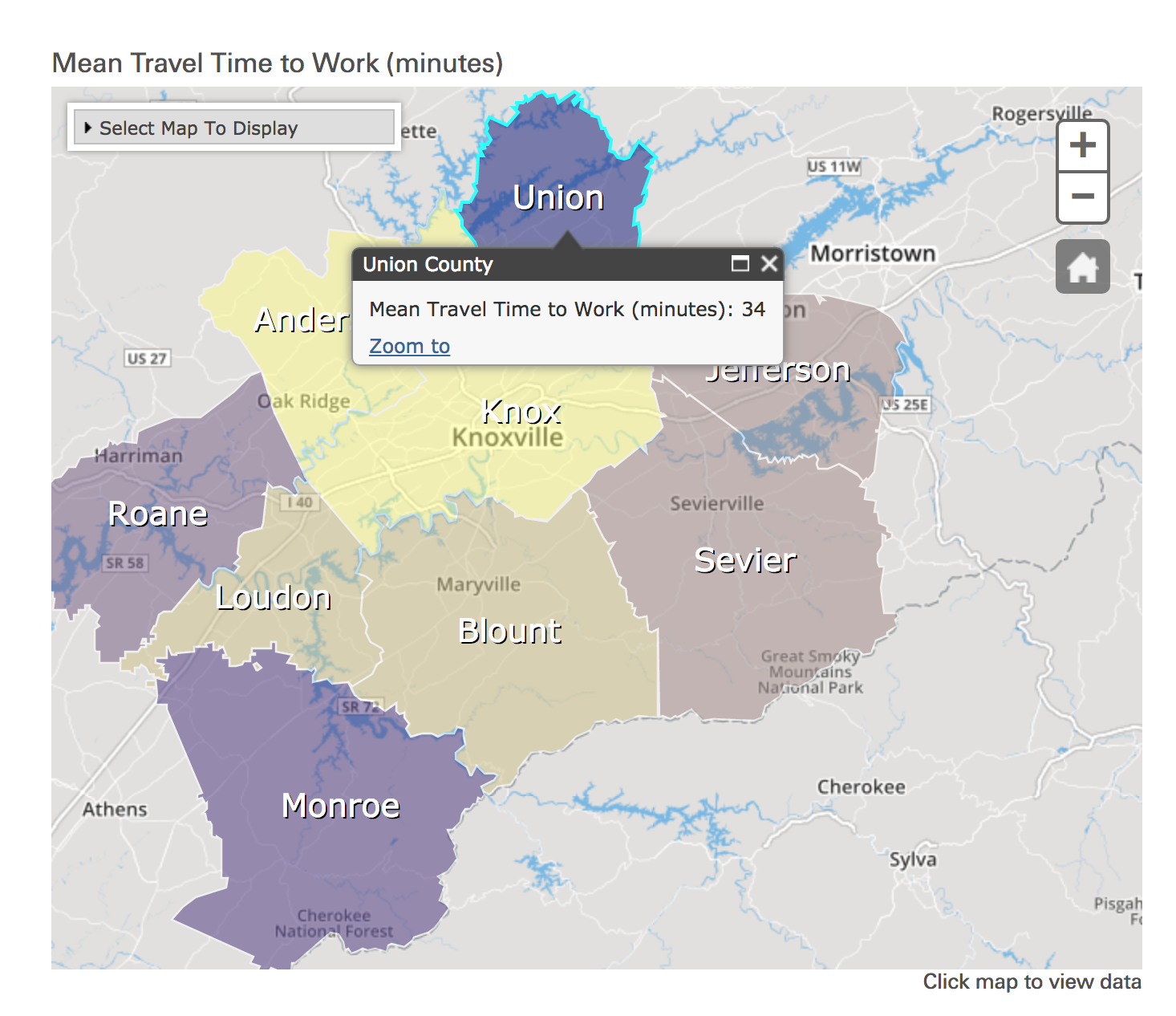 This difference could have an effect on a commuter’s daily routine and even their quality of life over time. Commuting can become a big part of the average day and affect life choices, such as where to live, where to get a job and where to send your children to school. Creating a travel time map for driving can help you to make informed decisions.

How do I make a travel time driving map?

You can create your own travel time map by using the TravelTime map tool. You can enter any location you wish to get the results you need. The below example shows different drive time maps from in and around Knoxville, Tennessee.

To create a drive time map you can enter:

The TravelTime map tool then calculates where can be reached within 30 minutes and draws a unique shape called an isochrone. Each point of the perimeter of the isochrone shape is equal to 30 minutes. 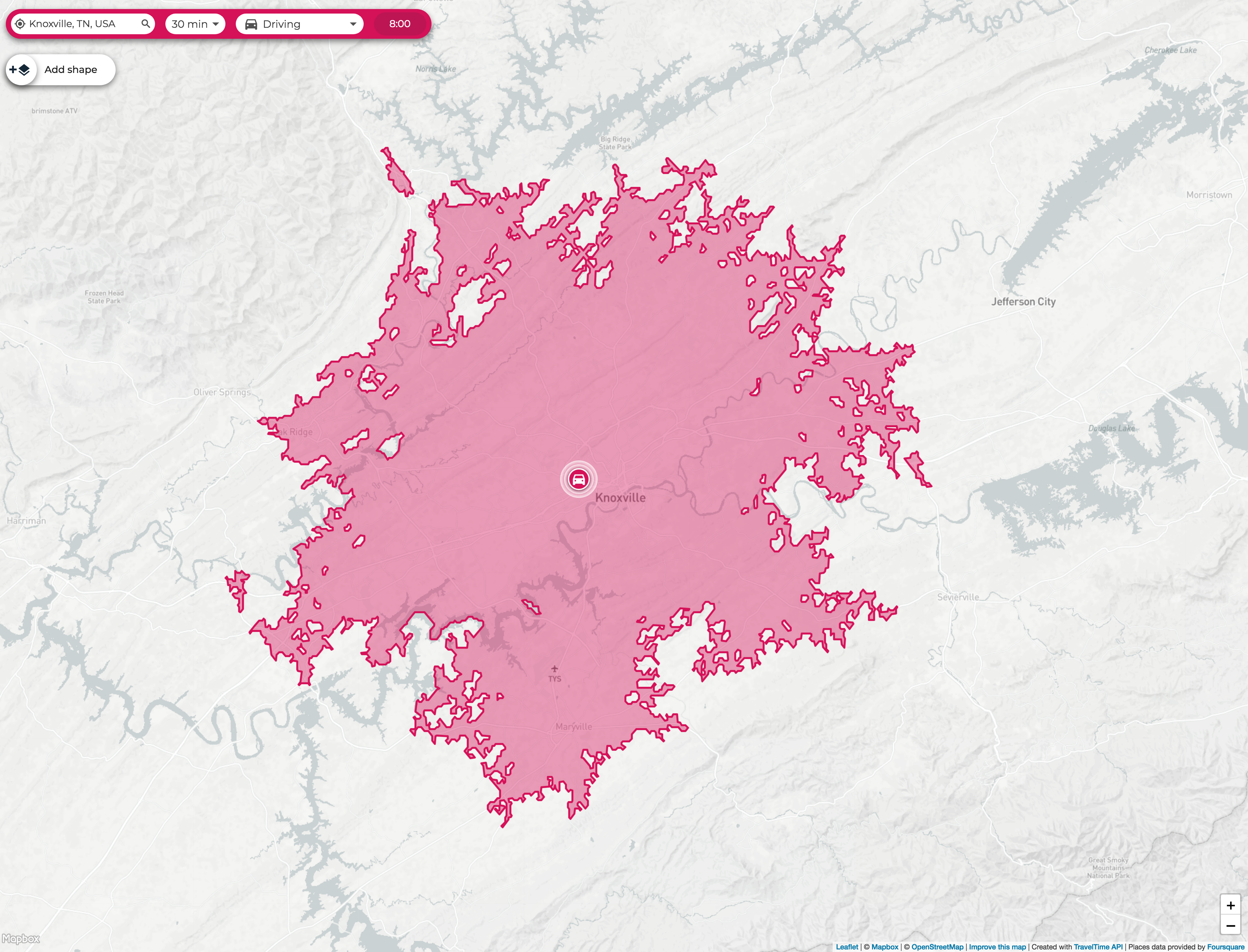 The above shape was created by calculating drive times departing Knoxville at 8am. But what happens if we change the departure time to 11am? 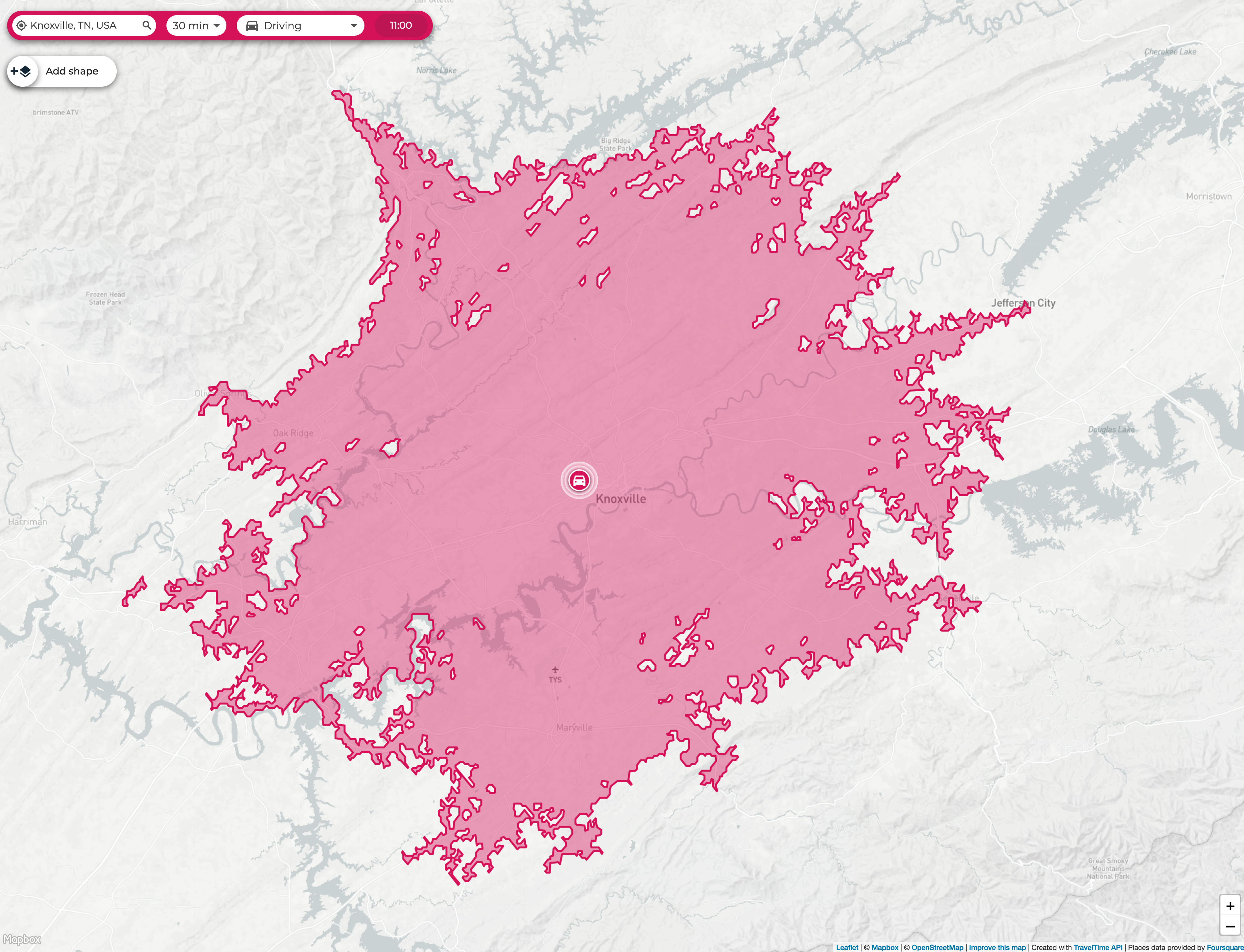 You can see on the map that areas such as Jefferson City and Sevierville are now reachable within 30 minutes drive time. This is due to the fact that 8am is a popular commute time, and so the average travel times increase due to traffic.

Similarly, the areas you can reach within 30 minutes will change if you change your search to arrive in Knoxville at 8am, instead of departing at 8am. 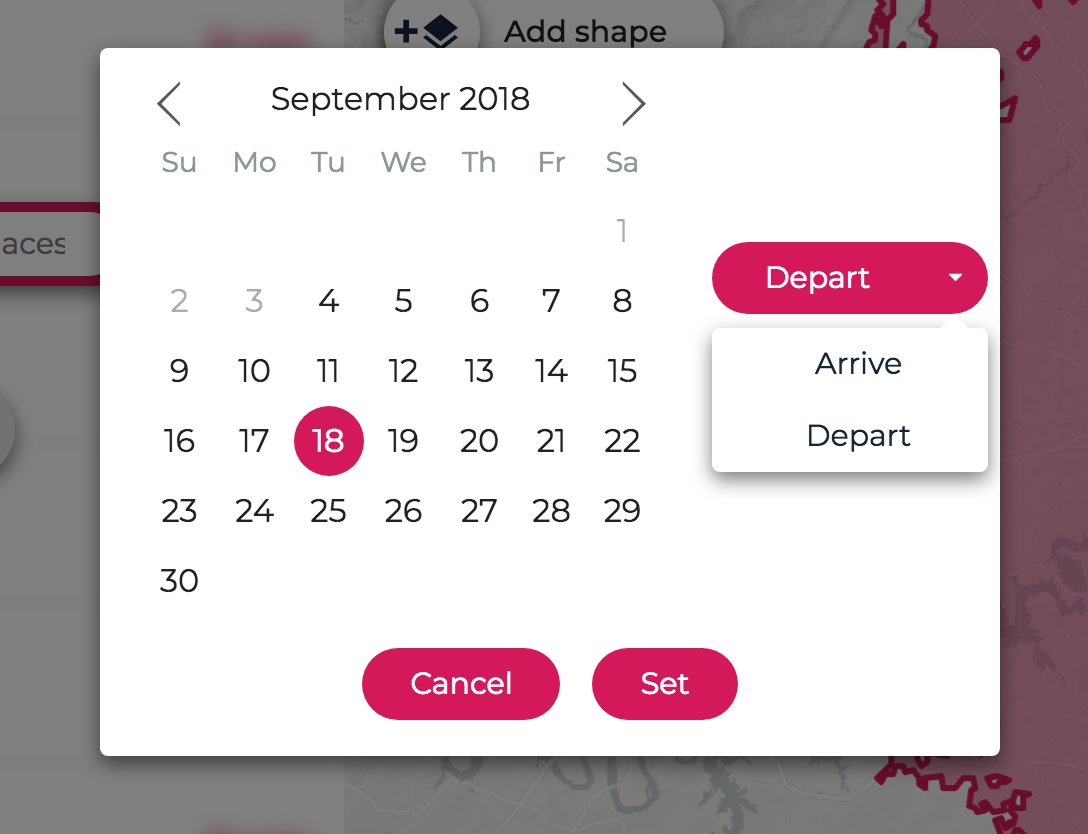 Again, you can see that Knoxville is reachable within 30 minutes from areas such as Jefferson City and Sevierville at that time of day. 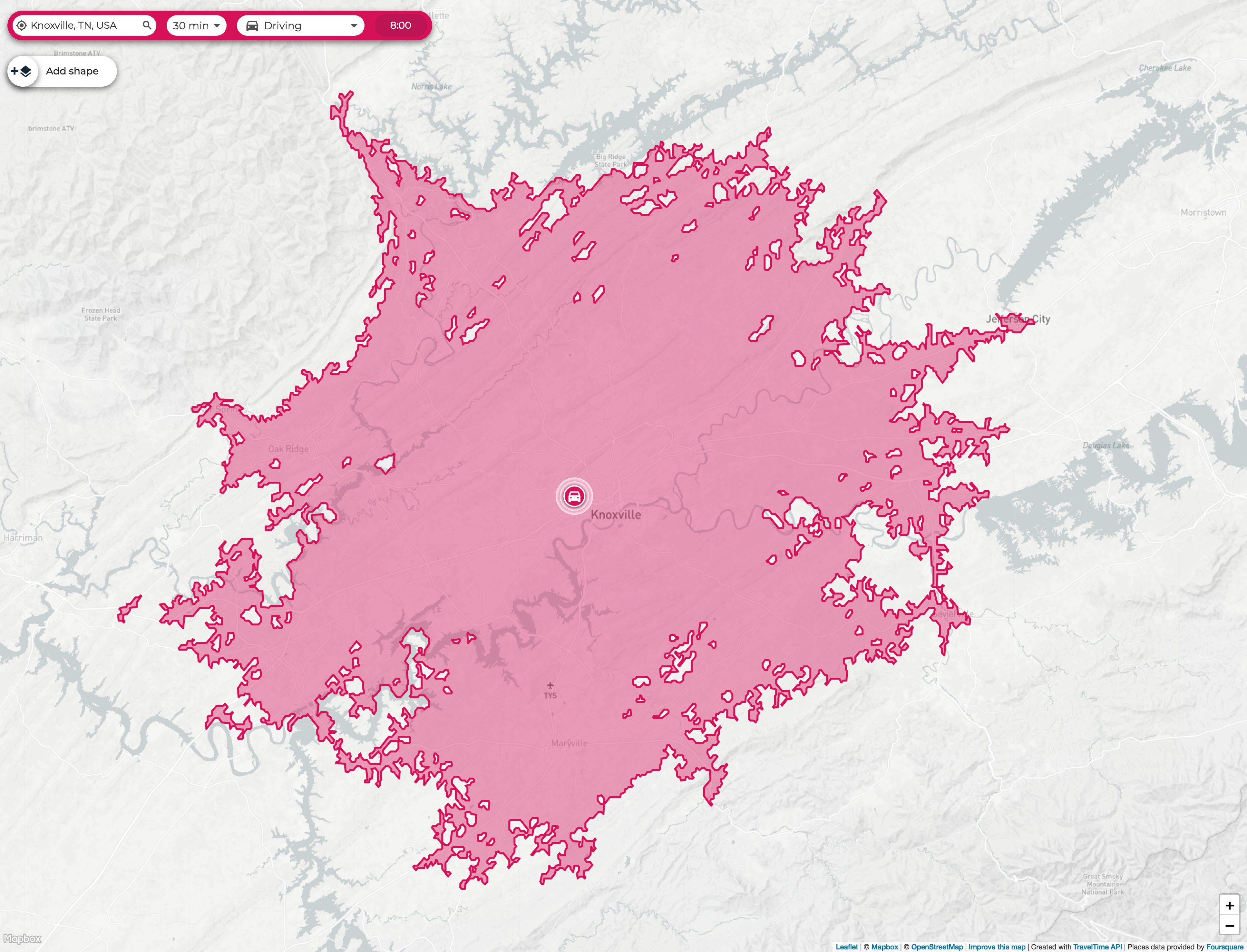 This type of calculation could help you make decisions about your work-life balance. If you lived in Jefferson City and were offered a job Knoxville, for example, you might negotiate an 8am start time to reduce the time you spend commuting.

As previously mentioned, changing the mode of transport decreases the reachable area. 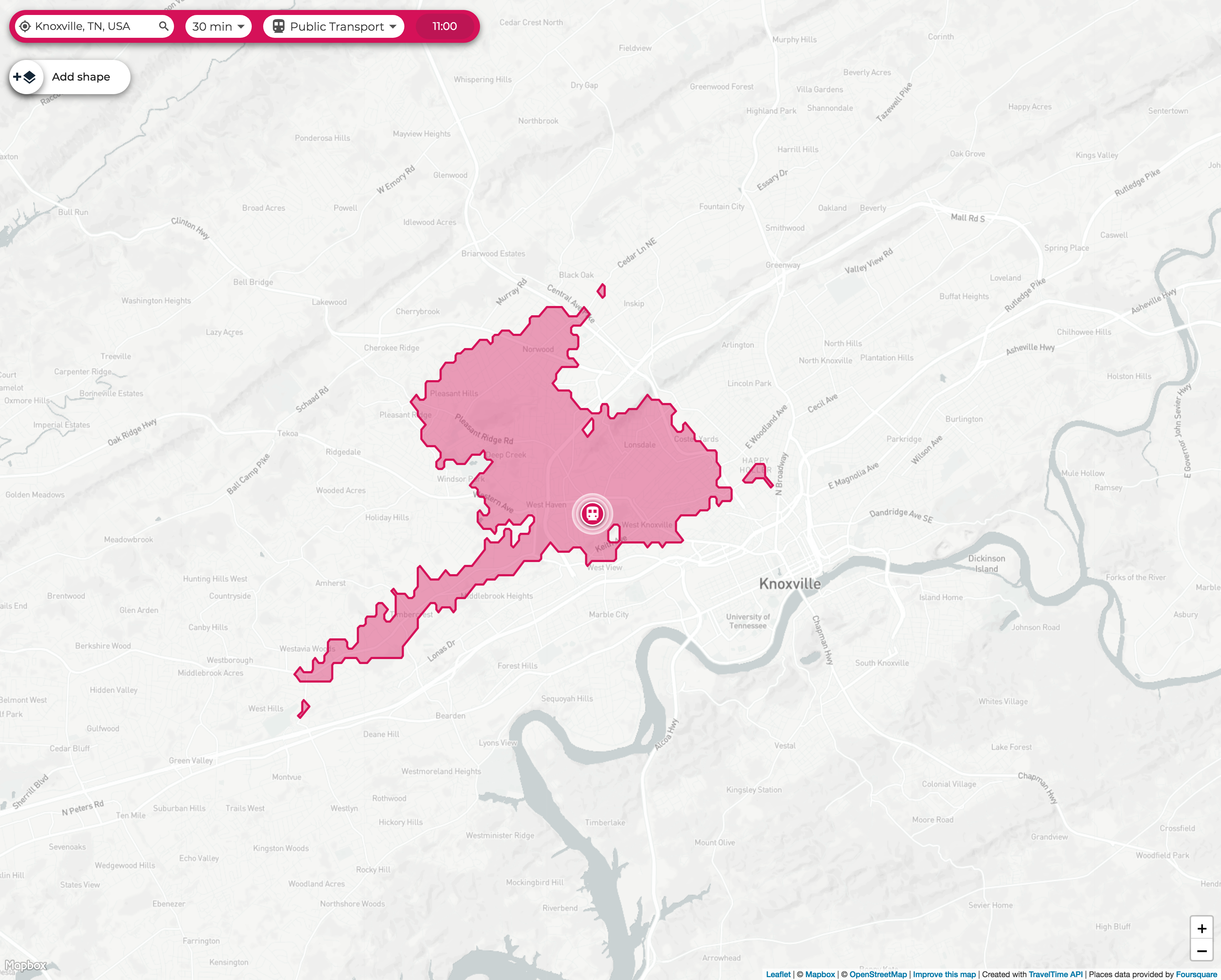 Using the TravelTime map tool you can drag the marker to a new starting point to compare driving times. The below example shows the isochrone shape that is created when you drag the marker to the city of La Follette, just north of Knoxville. 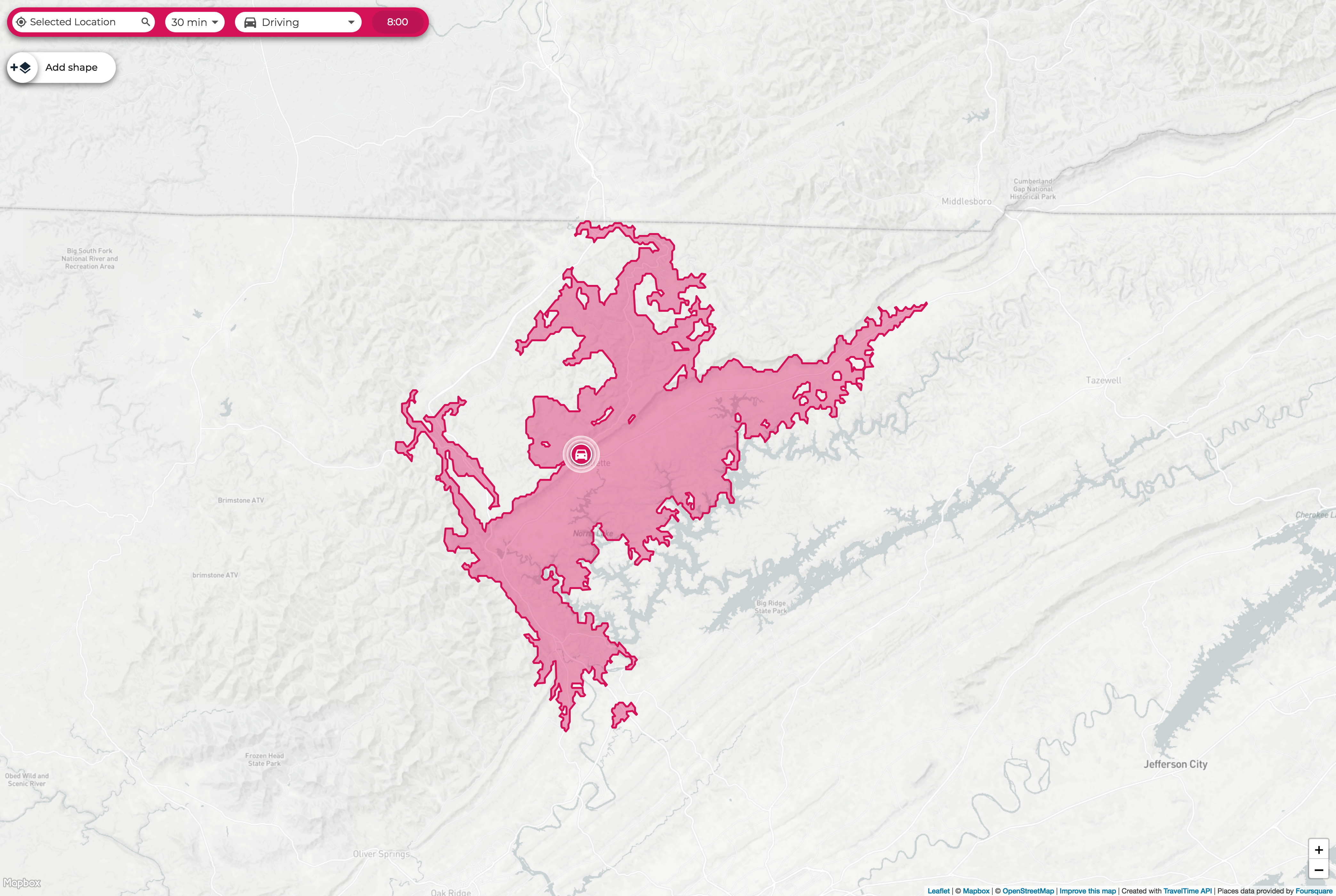 The isochrone shape is more irregular. Looking at the surrounding area you can see that there are limited roads that pass through La Follete. There are also parks and rivers, making travel more difficult. 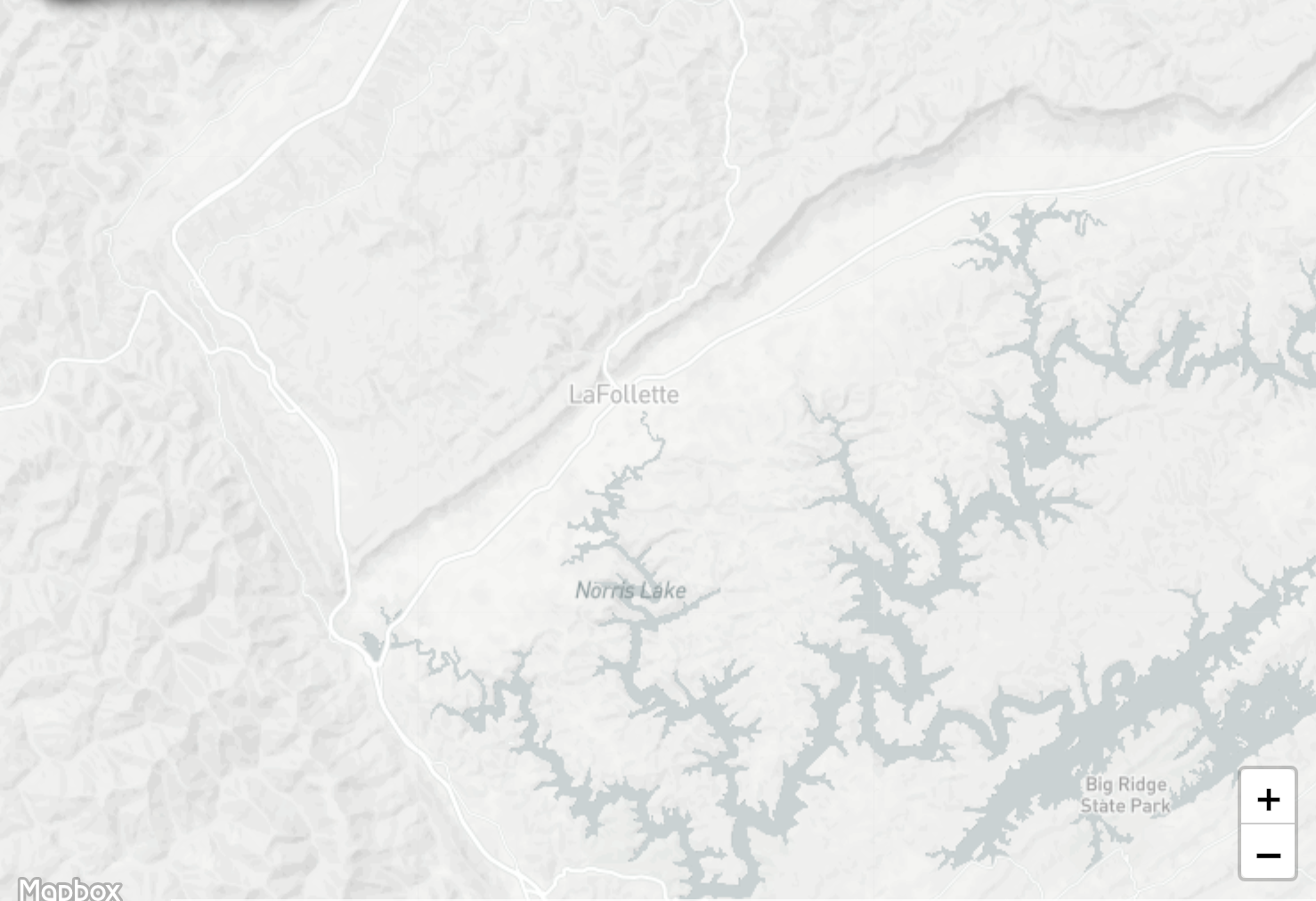 By contrast, Knoxville is connected by multiple main roads, making a journey by a car a lot easier. 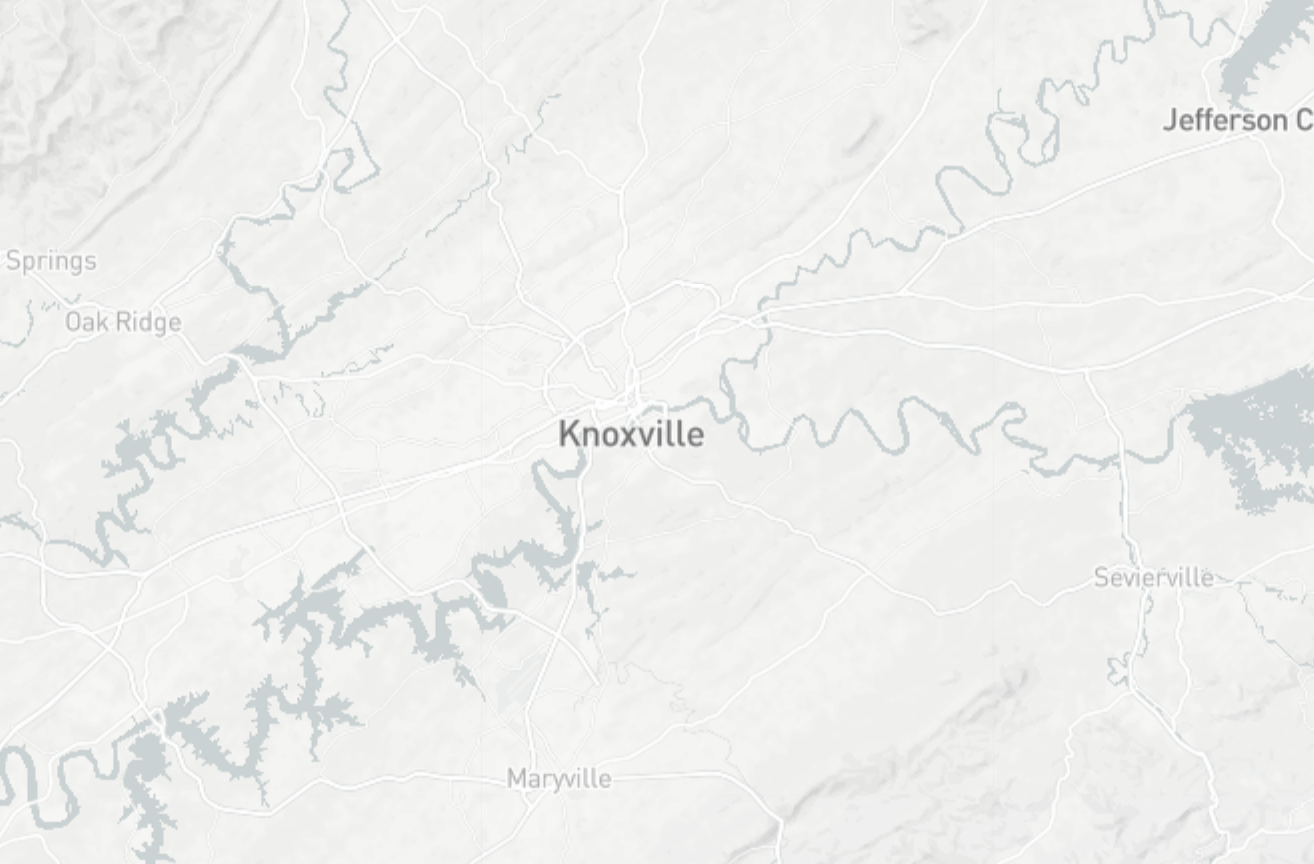 You can also use the TravelTime platform for large-scale projects, such as commute analysis for offices and office relocation. To discuss your bespoke project, get in touch.

With this Time Map endpoint tutorial using postman, you can get a list of coordinates showing a perimeter of where’s reachable within a travel time limit.