The NHS wanted to involve local citizens in the decision to choose a location for a new community hospital in the Forest of Dean, a decision affecting over 80,000 people and costing £11 million. There were three locations under consideration: Coleford, Cinderford and Lydney. 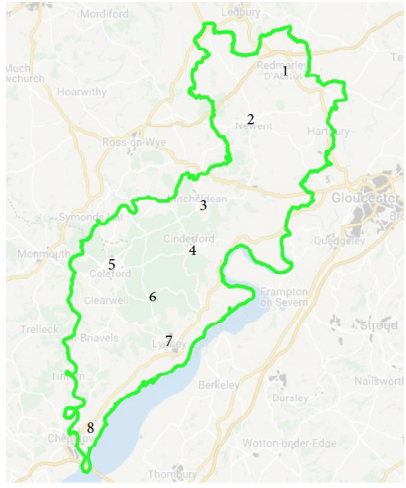 To make this decision, they called on the expertise of Citizens Juries CIC. Their task was to recruit a cross-section of people from across the Forest of Dean to be members of a citizens’ jury and then to identify the evidence that the citizens needed to choose a recommended town. One important factor that the jury needed to take into account was the time it would take for people across the Forest of Dean District to travel to the hospital by car and public transport if the hospital was built in Cinderford, Coleford or Lydney.

Citizens Juries CIC used TravelTime data to create location analysis maps. These maps included drive time and public transport catchment areas from the hospital locations. Citizens Juries CIC picked 8 places spread across the Forest and used the travel time maps to reach conclusions on which of these 8 places could be reached in 30 minutes by car, and by 90 minutes by public transport.  This illustrates how TravelTime data can be used to inform large-scale developments, such as the decision of where to build a new hospital.

The maps gave a clear picture of local access to the new development, providing the members of the jury with the travel time information they needed to make an informed recommendation to the NHS.

Using the Traveltime data visualization along with other relevant evidence such as population data and healthcare needs, the jury worked together over four-and-a-half days to reach a recommendation. They concluded that Cinderford should be the location of the new community hospital. On 30 August 2018, the Boards of Gloucestershire Community Services NHS Trust and NHS Gloucestershire Clinical Commissioning Group unanimously backed the jury recommendation, confirming that the new hospital would be built in or near Cinderford.

The panel was made up of 18 local people. Using TravelTime allowed the members of the jury to: 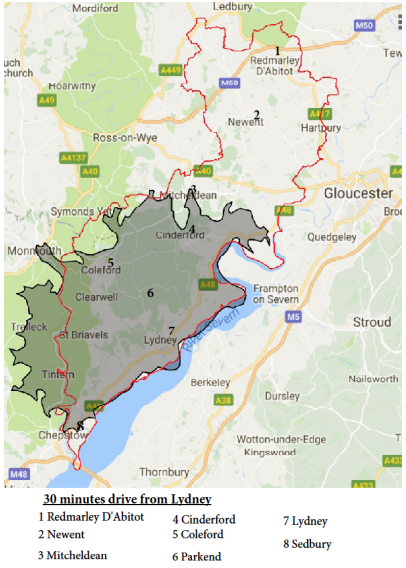 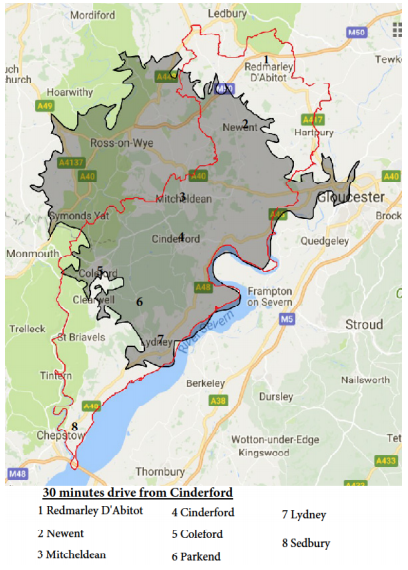 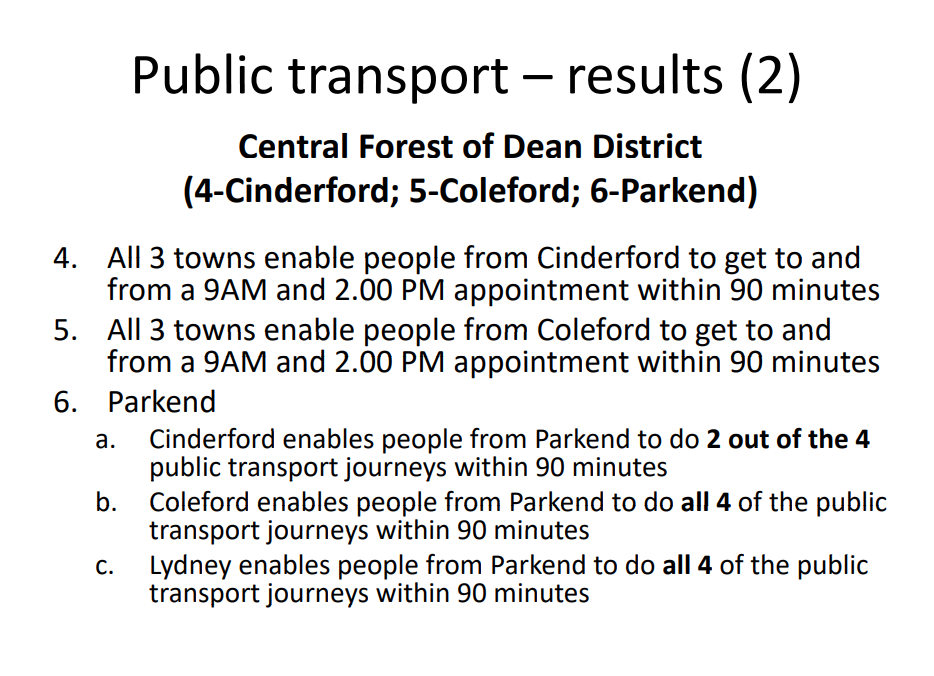 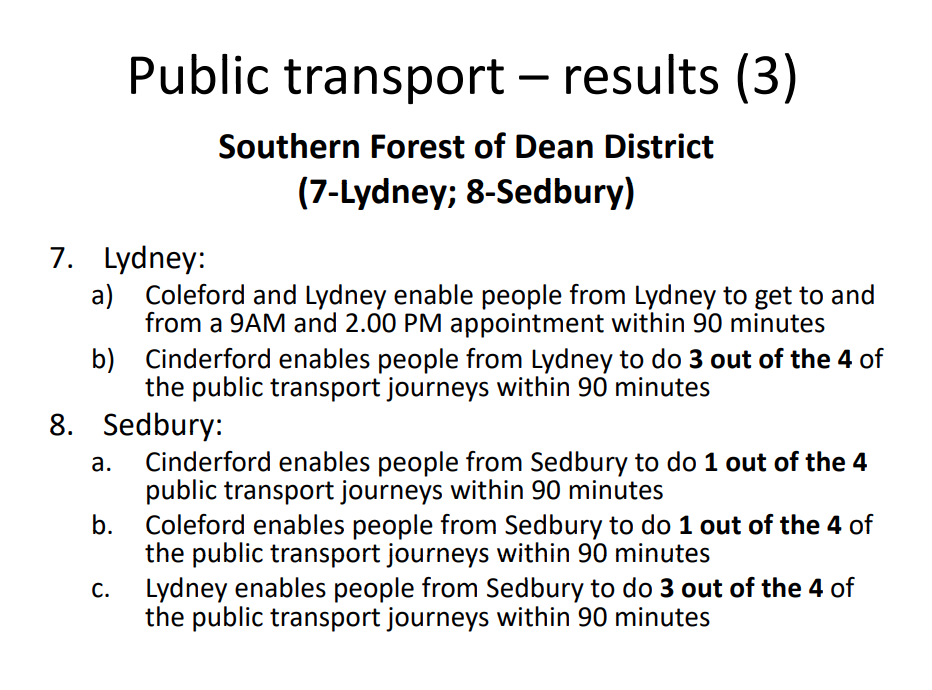 TravelTime helped Citizens Juries CIC by allowing them to:

How to select a hospital location

Selecting a location for a business, office or service, such as a hospital can be difficult and costly. You need to determine:

The best location for the building

Large-scale developments, like hospitals, need to be accessible for staff and the public. If the building is not accessible by public transport, for example, this could create an issue with parking and put further strain on already stretched hospital transport services.

Selecting a location for a development is incredibly costly. It’s important that the decision is correct the first time.

The effect the move will have on employees and service users

Citizens Juries CIC created travel time maps for driving and public transport. This allowed them to visualise how easy it would be for the public to reach the potential hospital locations. The example below shows the drive time map for 30 minutes from the proposed Lydney hospital.

Exporting maps allowed the jury to visualise demographic information in relation to the potential hospital locations. The image below displays the 30 minute drive area from Coleford. To get this shape TravelTime exported the KML file and imported it onto a Google Map.

Creating maps of district boundaries allowed the jury to consider whether the location of the hospital would be suitable today and in the future. The data visualization below shows where you could travel from in the Forest of Dean to get to one of the three towns (Coleford) by 08.30 on a weekday for a hospital appointment if the hospital was in Coleford. 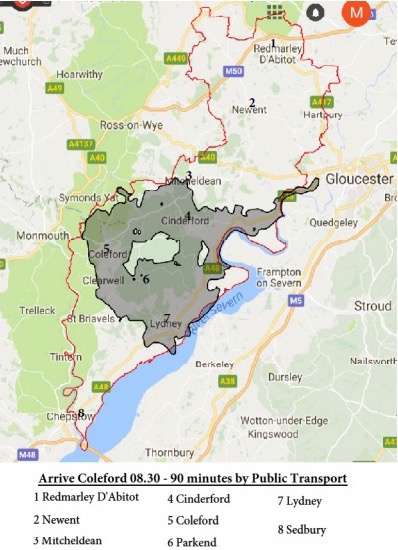 “Using TravelTime Analytics to create data and travel time maps allowed for a detailed analysis of the three hospital locations, and for information to be presented to the jury for their consideration in a way that was easy to understand. This aided the decision-making process for the jury and was an important factor in informing their recommendation to the NHS of Cinderford as the hospital location.

Citizens Juries CIC have used TravelTime Analytics to create mapping tools that provide powerful visualisations of information, allowing members of the Forest of Dean Citizens Jury to gain a greater understanding of their community, and make a logical decision about which location to recommend to the NHS decision-makers."